I was at a critique meeting the other day, and a beginning writer asked a fair question.

The backstory: She had brought in a manuscript that she’d spent quite a bit of time on. She’d revised it numerous times, shown it to editors at conferences, and even did the ol’ “set it aside for three weeks before tackling a final time.” She thought she was almost finished. This was her “get one last set of eyes before submitting.”

But she got such good feedback from this new group at the critique meeting, that it had her questioning exactly how “finished” her manuscript was. She wasn’t going to change any main plot points, but she was considering changing her main character’s name, part of his journey, and directly altering the story arc. (So, yeah, pretty big changes.)

She wasn’t panicking, but she was concerned. If she made those changes, what other changes might lurk around the corner? What changes would need to be made after those changes were added? No doubt, she liked and appreciated the suggestions, agreed with most of the feedback, and was open to implementing it all. She wan’t complaining. But how many more times would she be sitting in a critique group asking for and getting great feedback that would result in even more edits? More importantly–would her story ever be finished? She wasn’t in a rush to get her manuscript out the door, but she was overwhelmed with the thought of how many different ways her story could go.

I’m the best–and worst–person to ask that question. I think my tombstone will say “Hang on–I’m not finished with that yet–” because I am ALWAYS revising, reworking, editing, tweaking. I can always find a way to change a document. When I wrote a syndicated newspaper column, I submitted that thing a half second before deadline EVERY WEEK because I was always changing and rearranging. I drove myself nuts trying to make it perfect. But is anything ever perfect?

The answer to “When will I know I’m done” is actually another question. It’s kinda simple, really, and something I have to ask myself constantly. It goes like this: WILL THESE CHANGES MAKE THE STORY BETTER?

I mean, sure, the edits will change the story–but will it change your story for the better?

You can have your duck walk over a bridge instead of swim across the pond, you can have a kid sing show tunes instead of do homework, you can shake things up a million ways from Sunday. It goes without saying that it’s YOUR story and YOU need to tell it–regardless of what other people suggest. But fine-tuning details can drive you mad. (OK yes even story arc and plotting can drive you nuts.) I know they do me.

You gotta let it go at some point, knowing it’s pretty damn good. Changes from here on might be good, sure, but doggone it, it’s already darn good. Let. it. be.

There will always be a way to edit and change. Take this blog post as an example: I can add color, switch font, toss in kooky images (researching them will add an additional 2 hours alone to the posting process–oh, look, a dancing gerbil!).

But will any of it MAKE THE CONTENT BETTER THAN IT WAS BEFORE?

It might change things, but if it doesn’t enhance them to the point of “I can’t live without this direction/idea/switch“–well, then, carry on, soldier.

Your work is done. 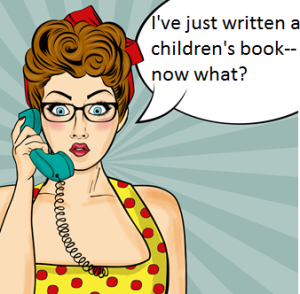 “I’ve written a children’s book…now what?”

As a published author, I hear this question a lot. Technology has made many things easier, but the publishing industry is still pretty standard. Sure, you could go the self-published route, which has earned a much better reputation than the past (but some small publishing houses are glorified self-publishers, so you have to be careful. Do your homework!), but you’ll still need to follow these first few steps.

Chronicle Books has stellar advice of their own, which backs up most of the advice above: http://www.chroniclebooks.com/blog/2014/12/17/so-youve-written-a-childrens-book-now-what/ and a self-pubbed author named Carrie Lowrence shares her experience with the detailed steps she took here: https://horkeyhandbook.com/wrote-childrens-book-idea-execution/

Hopefully this is helpful. I encourage you to take a step back, catch your breath, and make sure your story elements are perfect before you spend the time (or money) on copy editing or, of course, submitting. One of the tips I learned from Writers Ink was to set your story aside for two or three months, then come back to it with fresh eyes. Amazing how different it looks! I know 90 days seems like FOREVER but you will thank your three-month-future-self for waiting. Your story deserves the best care you can give it 🙂

-Bitsy Kemper is the proud author of 16 children’s books, including picture books, chapter books, and YA. She admits to spending too much of her early career focused on the computer industry, appearing in places like CNN and co-writing a nationally-syndicated newspaper column. She’s more recently appeared in Writing Children’s Books for Dummies (“how appropriate!” you may say) and Children’s Book Insider, and is the Regional Advisor for SCBWI’s CA North/Central region (covering 36 counties!). When not nose down and knee deep creating & editing, she has found time to present at author events and writers conferences from NY to CA. Bitsy enjoys yoga, dark chocolate, and church–but not all three at the same time. She is an accomplished speaker, mother of three (four if you count her husband), and according to her business card, a really nice gal. www.BitsyKemper.com.

…and lots of others…